If there’s one position that the 2019 Indians don’t have a lot of questions about, it’s the starting rotation. It’s safe to say that Kluber, Carrasco, Bauer, Clevinger, and Bieber are the starting five. What remains to be 100% known is, who will catch for them? As it stands now, the job for catcher appears to belong to longtime, quality backup, Roberto Perez. Kevin Plawecki and top Indians farm hand Eric Haase should be competing for the backup role.

With the departure of Yan Gomes, the Indians need one of their backstops to literally step up to the plate. Gomes was trusted by the pitching staff and he managed their games beautifully. He also provided plenty of offense with his bat. He left the Indians carrying a .248 AVG, along with 83 HR, 295 RBI, and a .719 OPS. Big shoes to fill for the next starting Indians catcher.

Roberto Perez will need to step up to replace Yan Gomes

Roberto Perez is Indians home grown talent. Signed in 2009, he has spent his entire professional career with the Tribe. He has been with the big league club since mid 2014, mostly in the backup role to Yan Gomes. With the injuries to Gomes over the years, Perez performed more than adequately as the main catcher. Who will ever forget his heroics and unbelievable performance in the 2016 postseason? In 2017, the Indians wisely inked Roberto Perez to a team friendly, four year deal, with club options for 2021 and 2022.

Roberto Perez owns the following offensive statistics: .205 AVG, .298 OBP, and a .638 OPS. He has 21 HRs, 41 doubles, 3 triples, 99 RBI, 108 BB, and 275 SO. Certainly not anything to get too excited about, or is it? Perez has 168 career hits. 65, or 38.6%, of them have gone for extra bases. That’s an impressive number and to put it into perspective, Yan Gomes had about 10% of his hits go for extras. Is it fair to compare Gomes’ numbers to Perez? Of course not. Catching is physically, the most challenging position. Gomes caught the lion’s share of games over the past five seasons. He caught 62% of the regular season games compared to Perez’ 38%. When you catch two thirds of the season, mentally and physically it takes a toll on a backstop and a drop in offense production is natural.

Roberto Perez is working on improving his performance at the plate

Roberto Perez has worked diligently on improving his swing and wants to contribute more on offense. This past offseason he spent time in the Dominican Winter League concentrating on his batting. In 24 games he batted .333 with a .853 OPS, a home run, four doubles, 11 RBI and 10 walks in 24 games. Encouraging numbers for sure.

Roberto Perez spent more time as a DH than catching to earn these numbers. Perez wanted to get more reps and consistency with his swings. He knows that will be the key if he is to succeed as the Indians number one catcher. He has acknowledged that it was hard for him to get into a rhythm at the plate the past few seasons with sporadic playing time. “When you don’t play, you try to make your at-bats one swing, especially if you play once or twice a week, you try to do too much,” Perez admitted. “You try to make up for games you didn’t get a hit, stuff like that.”

Not only does Perez have confidence in his ability to add more at the plate, his teammates believe in him too. During one of the first Cactus League games, team batting leader Francisco Lindor gave high praise to Perez. Lindor believes that Perez probably has the best batting eye on the team, if not in the game. He also agreed that with regular playing time and at bats, Perez will find his stroke and help the team put runs on the board with his bat.

The biggest assets Roberto Perez has over the other catchers in camp are familiarity, trust, work ethic, and confidence. As stated, the Indians is the only team Perez has known. He knows the pitching staff and they have every bit of confidence in his ability behind the plate. He has been Trevor Bauer’s personal catcher the past few seasons. Bauer has gone on record as saying Perez let’s him be himself on the mound. They trust each other and have an excellent chemistry together. Two time, Cy Young award winner, Corey Kluber also has high praise for Perez. He has complimented him for the way he manages and calls a game. Trust and confidence are words that both starting and relief pitchers use to describe Perez and his abilities.

Manager Terry Francona also has high praise for Roberto Perez and his skills.”The biggest thing is defense and running the game,” Francona said. “By that I mean, calling, putting the right fingers down, preparing, getting your pitcher through not just the easy parts, but the difficult parts. Perez is extremely prepared for that. I think we all feel that with more regular at-bats, he’s gonna hit better. If he doesn’t hit like Gomes, we still believe in the way he runs the game that he’s kind of a standout in that area. That’s first and foremost as a catcher.”

His defensive numbers back up Francona’s statement. He carries a .994 FPCT and rarely gives up a passed ball. With his strong and accurate arm he has thrown out 39% of would be base stealers. He is a master at framing pitches and extending the corners of the plate to help his pitchers get that strike.

There are other candidates to be the Indians starting catcher

The starting catching job is not just being handed to Roberto Perez. He will compete against Kevin Plawecki, a 4 year veteran who was acquired in a trade with the Mets in January, and the club’s No. 27 overall prospect, Eric Haase, known for hitting 20 home runs at AAA Columbus last year.

Average projections for the 2019 season show Perez contributing a .207/.295/.630 slash line, with 7 HR and 35 RBI. Not exactly wow numbers, but when you dig real deep into baseball projection numbers, you’ll find something that should wow you.

According to the 2019 Baseball Prospectus’ PECOTA projections, Roberto Perez is expected to be worth 3.2 WARP (wins above replacement player). That would place him as the sixth-best catcher in major league baseball. That, is a pretty impressive projection.

Perez’s work ethic, rapport with the pitchers, understanding of the game, and attitude all point to a positive season for Perez. It may prove to be challenging at times, as Perez will need to get used to catching 60% of the time. That’s a complete flip from past seasons. No one expects Roberto Perez to be Yan Gomes. They should expect him to be Roberto Perez and allow him the chance to prove he is worthy of being the Indians main catcher. 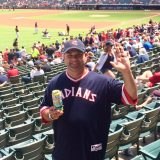 I live in Western New York, where to me, there are two seasons - Winter and Baseball. I am blessed to have within a few hours drive of me access to about a dozen Minor League teams and 3 Major League Teams. I am a DIE HARD Cleveland Indians fan thanks to the many summer road trips I took there with my father when I was a kid. Every summer my two boys and I travel through Ohio, visiting Cleveland, Akron, Lake County, and Mahoning Valley (no worries Columbus & beautiful Huntington Park, you're next). While the Indians will always have my heart, I truly just love good baseball, it's rich history, and ALL minor league teams and their players. I love to share the stats and profiles of a player, along with personal insights from the games I've seen, stadiums I've been to, and the players I've met. "This is a very simple game. You throw the ball, you catch the ball, you hit the ball. Sometimes you win, sometimes you lose, sometimes...it rains. Think about that for a while" Nuke LaLoosh - Bull Durham
More Posts (9)

Goaltender Joonas Korpisalo is on his way to Cleveland via loan and right winger Kole Sherwood has been assigned to the Monsters. The Columbus Blue…